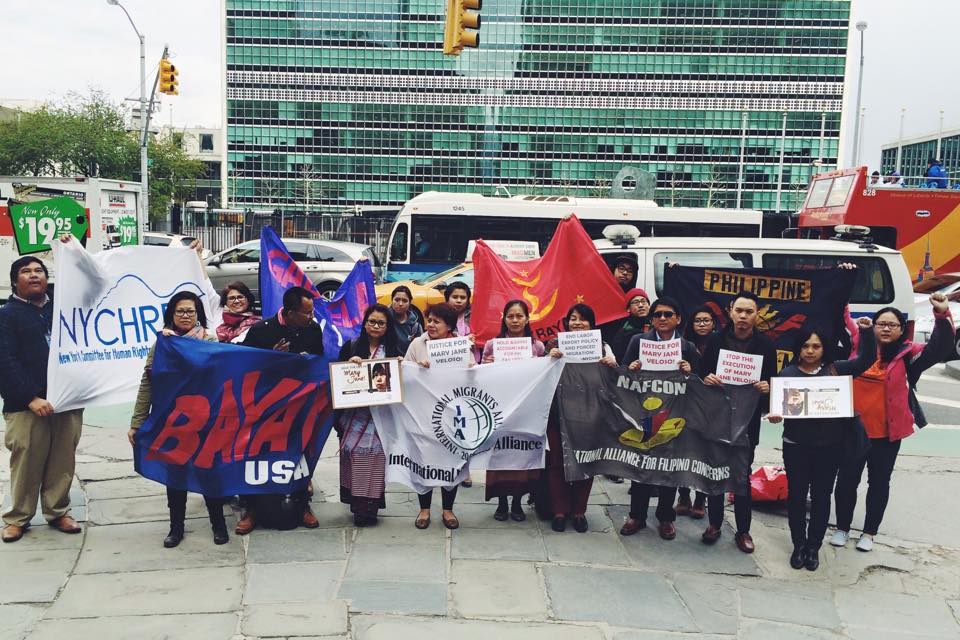 New York, NY – Less than 24 hours before the moratorium is lifted on the executions of everyone who is sentenced to death by firing squad in Indonesia , which includes a Filipina named Mary Jane Veloso, Filipinos in the United States come together in front of the United Nations today to be in solidarity in the global day of action to save  the life of Mary Jane Veloso.

Migrants come forward to assert their right to live without persecution. “Mary Jane is a Filipina domestic worker and after investigations of our lawyers from National United People’s Lawyers, her innocence becomes more evident. Above all, Mary Jane is a victim of trafficking. She should not have been persecuted, she should be protected,” stated Anne Beryl Corotan-Naguit, the National Vice President of the National Alliance for Filipino Concerns (NAFCON). “I am a migrant worker, a mother, a daughter, sister, I am Mary Jane Veloso. We are all Mary Jane Veloso. We are among over 12 million people who were forced to leave the Philippines and work abroad to provide and survive because of landless, joblessness and abandonment from our own government.”

United Nations delegate, Beverly Sakongan of the Indigenous People’s Movement for Self Determination and Liberation (IPMSDL) states in solidarity, “We join the fight to save the life of Mary Jane Veloso and support the call to bring her back home. Indigenous peoples are highly vulnerable for trafficking and organized crime. Governments take advantage of the poverty and vulnerability of indigenous women. Mary Jane is not an isolated case but, in truth indigenous peoples from Mexico, Guatemala also experiences the same persecutions.”

Filipino migrants across the world exposes President Aquino and the Philippine Government’s negligence. Jonna Baldres, President of Philippine forum, a member organization of the International Migrant Alliance states, “Mary Jane is a victim of failed system, a corrupt government that sells its people through its labor export policy. A government that does not protects its people but serves its master, the United States. We have seen other workers just like Mary Jane here in the United States, just like Ate Jackie, Ate Elma, Ate Leticia, Sentosa 27, Florida 15, Arizona 35, the GIS oil rig workers and many others. We stand up for all the other migrants who are victims of this failed and corrupt system.”

“If not for the international movement to save Mary Jane, the Aquino government’s usual pattern is to turn a blind eye to cases of human trafficking of OFWs, including those trafficked to the United States. We appeal to the Indonesian government to halt her execution as evidence has surfaced confirming Mary Jane is indeed a victim of human trafficking and drug trafficking. Her lawyers are currently in the process of filing a second judicial review.” Berna Ellorin, National Chairperson of Bayan USA states. “We call on our members, allies, and supporters to escalate our vigilance and actions in this period to save the life of Mary Jane Veloso.”

For information on how to support Mary Jane Veloso, please contact nychrp@gmail.com