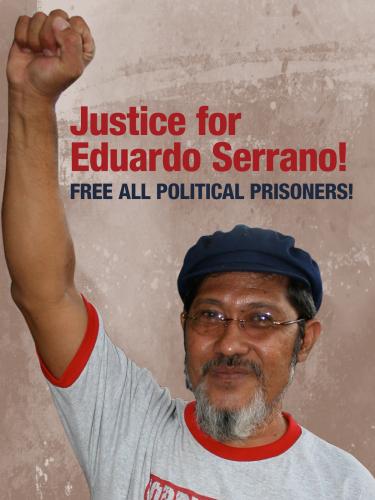 Justice for Eduardo Serrano: Free All Political Prisoners from the Philippines to the U.S.!

The New York Committee for Human Rights in the Philippines (NYCHRP) sends its deepest condolences to the family and friends of Eduardo Serrano, a Filipino political prisoner who passed away last January 8, 2016 due to cardiac arrest. Recently, he was released from 11 years in prison for trumped up charges. Serrano’s health worsened while in jail and did not receive proper care. We connect the abuse and neglect Serrano and others in the Philippines face with that here in the U.S. struggles to free Mumia Abu Jamal and other political prisoners, who are incarcerated in the prison industrial complex because of their steadfast activism against racism and U.S. imperialism. We demand justice for Eduardo Serrano by holding the Philippine President B.S. Aquino accountable for his death and call to free all political prisoners fromthe Philippines to the U.S.

The Philippine police and military continually arrest activists for trumped up cases of kidnapping and murder. Under Aquino’s counterinsurgency program, the real intention of arresting many human right defenders is the government red tagging of activists as members of the New People’s Army, the armed segment of the Communist Party of the Philippines. Red tagging is the practice of publicly labeling organizations or activists as terrorists, communists or rebels. The Aquino administration and past Philippine presidents have used red tagging to silence its critics. The labeling is used to justify and legitimize human rights violations of enforced disappearances and extrajudicial killings against human rights activists and defenders.

Philippine political prisoners are detained in hot cells that measure about 16 by 32 feet in size, with a window that barely provides an open crack for fresh air or sunlight in. Furthermore, the cell is filled with more than 20+ other prisoners.

Article 10(1) of the International Covenant on Civil and Political Rights guarantees that persons arrested must be treated with dignity. Article 12 of the International Covenant on Economic and Social Rights protects the right of the highest standard of physical and mental health. Since the Philippines is a party to both of these conventions, the Filipino human rights group, KARAPATAN, suggests that the treatment of prisoners in general implicates these two provisions. In particular, the overemphasis in prisons on punitive punishment makes detainees vulnerable to inhumane treatment and conditions. The U.N. Basic Principles for the Treatment of Prisoners and the U.N. Standard Minimum Rules for the Treatment of Prisoners both detail the rights of prisoners and how prison conditions can meet acceptable international standards.

We will continue to call on the Philippine government to end red-tagging and counterinsurgency campaign as a tactic to undermine critical voices. We also call on the government to observe human rights laws, particularly those standards in treaties to which the Philippines is a state party, with respect to prison conditions and the treatment of sick, female, and pregnant prisoners. Furthermore, we demand to free all political prisoners from the Philippines to the U.S.!

New York Committee for Human Rights in the Philippines (NYCHRP) is a local education and advocacy group based in New York City that works to promote social, economic, and political alternatives that foster democracy and peace based on justice in the Philippines and for Filipinos in the diaspora today.

NYCHRP shares the vision of human rights advanced by the National Democratic movement of the Philippines. NYCHRP educates, organizes, and mobilizes people and communities in NYC to take progressive action to uphold and support human rights in the Philippines and throughout the world.

To Donate on SquareCash: cash.me/$NYCHRP