We are in a season of human rights anniversaries. Every August 30 is memorialized as the International Day of the Disappeared, calling attention to the victims of enforced disappearances. September 21st is the anniversary of the day that martial law was declared by the dictator in the Philippines. The New York Committee on Human Rights in the Philippines (NYCHRP) calls to mind the friends, co-workers, parents, children, and community members who government forces have forcibly and secretly taken away from the people who love and care for them.

NYCHRP remembers, in solidarity, the disappeared of Mexico, particularly in Ayotzinapa. Three years since the disappearance of 43 college students from the city of Iguala, the case has exposed the link between corrupt officials and paramilitary gangs profiting from drug smuggling and other illicit activities. NYCHRP also remembers the 29 victims of enforced disappearances in the Philippines. NYCHRP opposes the culture of impunity and corruption that deny justice and accountability to people in the Philippines where an oppressive local and international elite subdues the people under semi-feudalism, bureaucrat capitalism, and imperialism.

Amidst the exacerbating crisis in society and economy, NYCHRP also denounces the unbridled violations of human rights in the Philippines. Since the start of Duterte’s War on Drugs in 2016, nearly 12,000 people have been killed, mostly alleged drug users and small-time peddlers from among the poor. Tens of thousands of others have been thrown into jail, packing into prisons in a country which only has worsened the objectionable conditions of prisoners and political prisoners alike. One facility is overcrowded with 2,975 prisoners, or 10 times its legal capacity, and three-quarters are jailed for drug-related offences.

NYCHRP also condemns the continuing violation of human rights by Duterte’s martial law in Mindanao. The University of the Philippines – Diliman campus hosted a Lakbayan of national minority peoples and groups from all over the country in its third year. This year’s Lakbayan has a special significance: it will be the broadest protest action against martial law in Mindanao, the continuing destruction of the Islamic City of Marawi, and the worsening state of the residents of the city. People have been without homes since May 23. NYCHRP supports the fight for democracy, for human rights, for the dignity of the Lumad and the people of Marawi, and against the threat of the return of a dictatorship.

September 21 is the anniversary of the declaration of martial law by dictator Ferdinand Marcos. NYCHRP laments that the Philippines, in Mindanao, is once again under martial rule, and violations of human rights are increasing. NYCHRP calls on people to hold the President accountable to enacting genuine economic, social, and economic reforms that will actually solve the problems of the Filipino people. NYCHRP calls on the Duterte government to confront the roots of armed conflict and to reengage in peace talks with the revolutionary government of the Philippines in order to finalize the Comprehensive Agreement on Economic and Social Reforms.

NYCHRP is a volunteer-run education and advocacy group in New York City that promotes social, economic, and political alternatives that foster democracy and peace. NYCHRP shares the human rights vision of the National Democratic movement of the Philippines, and organizes people and communities to uphold and support human rights in the Philippines and the world. 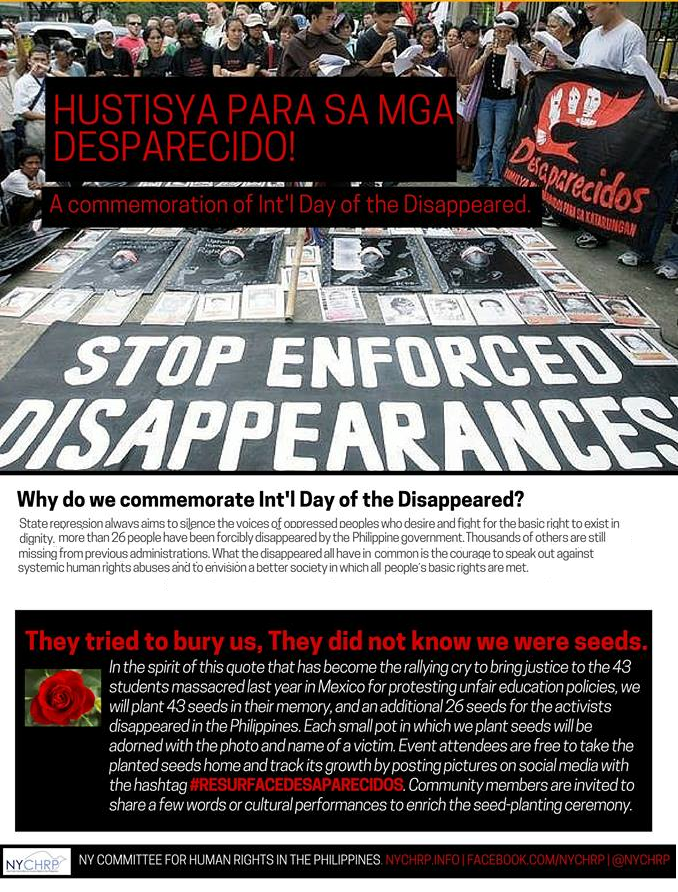