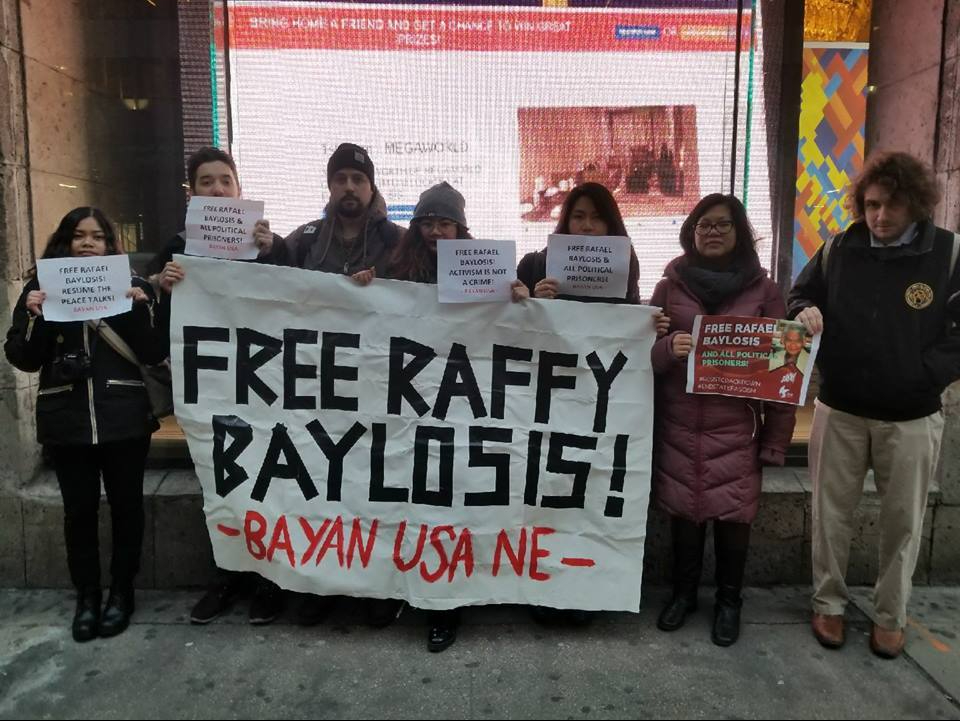 On February 5, 2018, human rights advocates and peace-loving people, including members of BAYAN USA and International Coalition for Human Rights in the Philippines (ICHRP USA) entered the Philippine Consulate General of New York to demand the release of all political prisoners, including Rafael Baylosis. Bernadette Ellorin, of BAYAN USA, and Hank Broege, of ICHRP USA and NYCHRP, led the group in delivering a letter of concern to Consul General Ma. Theresa B. Dizon-De Vega. The consul general refused to meet with the advocates sending a delegate instead. Ellorin requested that the letter be delivered and demanded to release Baylosis, all political prisoners, and raised concerns about the 13,000 victims of extrajudicial assassinations under President Duterte. Meanwhile, the group started chanting, and calling for the release of Rafael Baylosis, with signs in hand. The security personnel threatened to call the NYPD on the activists.

“The consul general was caught off guard. I hope that they were embarrassed that these human rights violations are ongoing. I hope that we were able to convey that what Duterte is doing is very unpopular and that many people condemn the atrocities that he is committing. I hope that they are more careful with what they do, how they represent themselves, and the issues in the Philippines. People all over the world are finding out about what is going on in the Philippines and the government should feel that pressure under scrutiny,” commented Broege.

On January 31st, peace activist Rafael Baylosis, 69 years old, and his companion, Roque Guillermo Jr., were arrested by members of the Criminal Investigation and Detection Group-National Capital Region  (CIDG-NCR) on trumped-up charges. Rafael Baylosis is a long-time activist and labor leader. He is also a peace consultant of the National Democratic Front of the Philippines (NDFP). The arrest of Baylosis violates the Joint Agreement on Safety and Immunity Guarantees (JASIG) and Comprehensive Agreement on Respect for Human Rights and International Humanitarian Law (CARHRIHL), which the government of the Philippines is obligated to follow.

On January 26, 2018, President Rodrigo Duterte, repeated his vow to crush the New People’s Army (NPA) within the year, including the so-called ‘legal fronts of the Communist Party of the Philippines (CPP). With these recent threats, the Philippine government has executed a renewed round of harassment against activists including Vencer Crisostomo (Chairperson of Anakbayan), Einstein Recedes (Secretary General of Anakbayan), Teddy Casino (BAYAN MUNA Partylist), Renato Reyes Jr. (Secretary General of BAYAN), and Representative Carlos Zarate (BAYAN MUNA Partylist) in addition to the arrest of Baylosis.

BAYAN USA and ICHRP then took their call to the streets outside of the Philippine Consulate, calling for the release of Baylosis and political prisoners saying “activism is not a crime.” The initial advocates who entered the Philippine Consulate were joined by other members of BAYAN USA and ICHRP. Solidarity allies also joined and spoke against human rights violations. Many spoke out against martial law, fascism, human rights violations, and supported the call for peace talks and the release of political prisoners. Speakers highlighted the solidarity between the Philippine liberation struggle and the black liberation struggle. Joined by NYC Shut It Down: The Grand Central Crew #blacklivesmatter, advocates then marched to Times Square to share to the broader Times Square public 5 facts about Baylosis’ arrest and the interconnectedness of liberation struggle and repression.

The U.S., under Trump, has given over 100 million dollars to support military operations in the Philippines. These tax dollars are used to fund the active martial law operations in Mindanao and military repression elsewhere in the country. Duterte has arrested at least 145 people for politically-motivated reasons, including six peace consultants, a Bishop, and other faith leaders, bringing the total to over 486 political prisoners under his administration.

Meanwhile, human rights advocates such as members of NYCHRP continue to call for the resumption of peace talks, to continue the negotiation on the Comprehensive Agreement for Socio Economic Reforms (CASER), to end martial law, and to end fascist impunity.

Free Rafael Baylosis and All Political Prisoners! Activism is not a crime! Never again to fascist dictatorship! Resume the Peace talks!